Posted on February 7, 2012 by lauritzblog

What is an icon? For a Russian Orthodox Christian, it is a sacred religious object, filled with mysticism and deep spiritual meaning – and even the power to work miracles.

The word “icon” (from the Greek εἰκών, meaning image or representation) refers to works of art – usually paintings – with religious content, meaning and use. And you would be hard-pressed to find a Russian Orthodox home without them. Some homes even have so-called Red or Beautiful Corners devoted to their most cherished religious images and to prayer. And a Russian Orthodox Church is unimaginable without its holy images of Christ, Mary the Mother of God, saints, and other biblical subjects.

Renowned French painter Henri Matisse fell in love with the icon when he travelled to Russia in the early 1900s. Deeply impressed, he incorporated many aspects of its colouring, silhouettes and composition into his own work, prompting followers to create their own “modern icons.”

Today, the Russian government also considers icons quite valuable – and even forbids the export of any works over 100 years old without permis-sion. But it was not always so. Actually, the Russian icon’s colourful history reads a bit like an art crime bestseller, filled with tales of persecution, passion, hatred, destruction, smuggling – and a return to grace.

The icon has been an integral part of Russian culture and religion since it came to Russia from the Greek Byzantium, together with Eastern Orthodoxy, in 988. In the 15th century, iconographer Andrei Rublev personalised – and popularised – the icon with a softer style. But in the 18th century, both Peter the Great and Catherine the Great – Russia’s great Westernisers – destroyed many “old” icons or had them repainted in modern style.

The icon survived the royal threat. The more recent Communist threat, however, proved far worse. After Russia’s 1917 revolution, when the Communist Red Army ousted Russia’s last Tsar, the Communists set out to destroy all religion and its symbols. They demolished countless churches and the icons within. Many icons’ precious metal and enamel covers were even sent to military factories as scrap metal to make guns and rifles for the Red Army! Later, interested foreign diplomats and businessmen bought icons from the Soviet government. 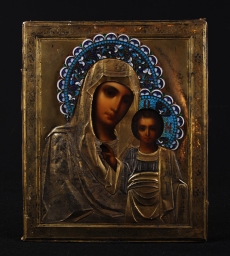 Russians fought to save what icons they could. Many of those who were exiled or fled after the Revolution took their icons with them. Some of these émigrés, like “the new Rublev” Gregory Kroug, were iconographers who revived the art form abroad. But Orthodox Russians who remained in their homeland also fought to protect the sacred images, hiding them in their homes – or continuing icon-painting underground (Maria Sokolova was a star in this movement).

In 1991, when the Soviet Union fell, both religion and icons began to regain their old status. Destroyed churches were rebuilt – and icon-painting workshops sprouted up all over the country. 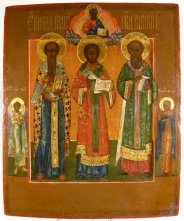 Today, Russian icons enjoy an international audience that spawns the whole globe. To many, they continue to be strictly religious works. But their presence in private and public collections and museums is a testament to their status as remarkable works of art, able to captivate amazingly diverse audiences with their mysticism and unique, timeless style.

Find your own personal favourite at auction today.

Anastasya Partan, a Boston-based freelance writer, is a guest blogger for Lauritz.com. She was born in Moscow, raised in the US, and has lived in New York, Washington, DC, London, Paris, and Copenhagen. With both a corporate and creative background, she writes for international brands and explores topics related to lifestyle, culture and the arts.

This entry was posted in Older art. Bookmark the permalink.

3 Responses to The short, dramatic story of Russian Orthodox icons